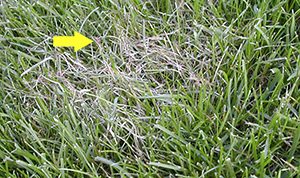 Lawn disease seems to appear from nowhere and spread rapidly. The most common diseases are red thread, dollar spot and brown patch.

Unfortunately, these diseases are difficult to control because the fungus causing the disease is a plant-like organism that lives in close quarter with its host, the grass. Fungi spread via tiny powder-like spores. Spores are spread by wind, water or by mowing or walking on infected grass.

Fungi flare up when temperature and moisture conditions are just right. You can prevent these diseases by using Bayleton in the early Spring or Summer, it can also be used as a control when needed.

Bayleton is systemic, which means it is taken up within the plant. The systemic action is most effective because it provides internal protection (approximately 21 days) that does not wear off and will act against a fungus even after it enters the grass. 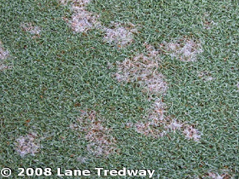 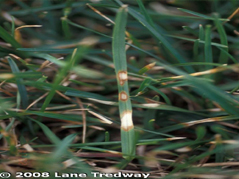 Brown Patch [Rhizoctonia solani]
The symptoms of brown patch vary according to mowing height. In landscape situations, where mowing height is greater than 1”, brown patch appears as roughly circular patches that are brown, tan, or yellow in color and range from 6” to several feet in diameter. The affected leaves typically remain upright, and lesions are evident on the leaves that are tan in color and irregular in shape with a dark brown border. When the leaves are wet or humidity is high, small amounts of gray cottony growth, called mycelium, may be seen growing amongst affected leaves.

The affected leaves typically remain upright and are characterized by having white or light-tan lesions with light reddish-brown margins. As the lesions expand, the leaves are girdled and the upper part of the leaves dies slowly. Distinct lesions are sometimes not evident on close-cut turf grasses; instead, the leaves die back from the tip and turn white or light tan in color. The grass in the spots may be killed to the soil surface if the disease continues to develop, and many spots may merge to produce large blighted areas. Short, fuzzy white mycelium is often observed on affected turf in the morning when dew is present.

When Does This Lawn Fungal Disease Occur?