This is one grass that can drive you nuts 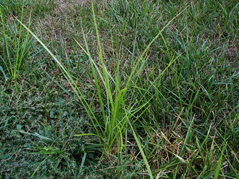 I have a serious nut grass problem. I redid the lawn last year and thought I killed it all off. But it’s back. Please help. Gaspar Saladino, Plainview. Your nut grass problem is an unfortunate one. Nut grass, or nutsedge, has the distinction of being listed as the worst weed known to man in “The World’s Worst Weeds: Distribution and Biology” (Krieger Publishing, 1991). It is considered a noxious weed in more than 100 countries, spreading via seeds, tubers and rhizomes.

In some parts of the world, the problem is so bad that affected fields reportedly have been abandoned in despair, according to Metafro, a research data collection agency based in Central Africa. There, pigs are relied upon to control the miscreant. Apparently, they’re drawn to the weed’s sweet, succulent tubers. 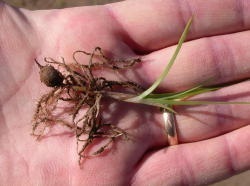 I realize, however, that bringing in a horde of pigs might not be practical in your Plainview garden. But don’t despair: There are some suburban-friendly alternatives.

Because it roots so deeply, nutsedge is very difficult to remove. Replacing your lawn might not have done the trick. In order to eradicate it completely, it’s important to cultivate very, very deeply, as the tuber system runs very deep. Each plant can produce hundreds – even thousands – of tubers in one season, some of which can remain dormant in soil for 50 years, according to a Cornell Cooperative Extension horticultural fact sheet. And it’s even more prolific after a wet spring.

I spoke with Andy Senesac, a weed scientist at the Extension office in Riverhead, who said replacing the lawn should have involved using a systemic herbicide such as Roundup, which would have helped control the weed but wouldn’t have been 100 percent effective with only a single application.

Senesac recommends using a selective herbicide called SedgeHammer, which can be safely applied this time of year and will help kill the weed without harming the grass. Other herbicides might be recommended by landscapers, but Senesac says SedgeHammer or Halosulfuron pro (commercial version) is by far the best one registered for use on Long Island turf.